The Delta Faucet Company has a new product on the market that exemplifies everything you could want in a faucet. Unlike traditional faucets that limit you with a simple handle or two for turning on and off water flow, Delta’s Touch2O.xt faucets give you three different options to start and stop the flow of water. The original Touch2O faucets that Delta introduced back in 2008 utilizes technology similar to that found on smartphones. This feature efficiently delivers precise, responsive control with a mere touch to the spout or handle.

Delta was the first on the market to bring this type of faucet to the home, and they have been leading the way in research and design of touch, and hands-free faucets ever sense. These Touch2O Faucets continue to grow in popularity because they make working around the sink so much more convenient. Keeping faucets clean even when hands are dirty is just one of those improvements. 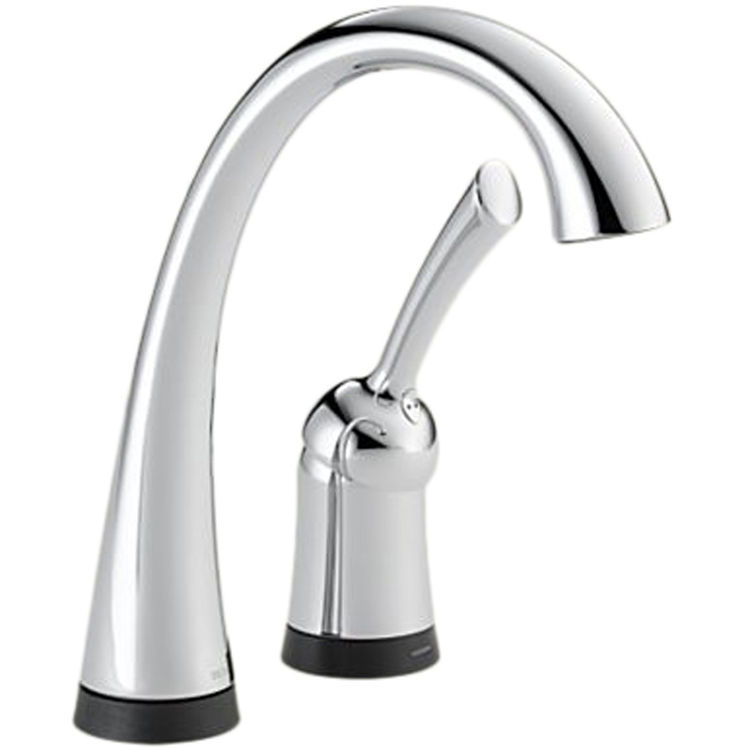 Apparently, through its research, delta has discovered another need and has incorporated it into the new Touch2O.xt faucets, it’s called proximity sensing.  These faucets now can sense movement around the faucet and will turn on if you get within 4″. Rather than a small infrared sensor at the base of the faucet, Delta tuned the entire faucet into a sensor. This eliminates the frustrating interference of outside factors such as lighting conditions, color or even highly reflective objects.

Touch2O.xt faucets feature a convenient LED light that lets you know that the faucet is on. A blue LED light occasionally flashes to indicate that the faucet is in the hands-free sensor mode. That same light remains constant to indicate the touch feature is activated. This is perfect for families with younger children who may occasionally forget to shut off the faucet. This little blue light will catch your attention as you walk by a dark bathroom, letting you know that it is still on. The light turns red when the batteries need to be replaced (every 18 months or so). The light Requires 4 AA batteries, which are included with purchase.

Delta had the foresight to include an automatic shut-off feature that will turn off the flow of water if no movement is sensed after a while.

Delta’s research team has found that the majority of people prefer the control and responsiveness of touch activation to shut the water flow off. That is what makes the Touch2O.xt series so impressive. Unlike many proximity sensing faucets, the Flow and Temperature of the Touch2O.xt are controlled above the counter with a single lever handle. Water flow can be turned on without touching the faucet, and turned off by a simple touch.

Where to Buy Delta Touch2O

Currently, you can buy Deltas Touch2O  Faucets in multiple styles and designs to match the decor of any home.  The Touch2O  Series include the Trinsic, Pilar, Addison, Cassidy, Lindon, Lewiston, Lahara, Ashton, Dryden, Leland, Savile, Allora, Deluca, Berkley, and Victorian Series. The Touch2O.xt Faucets are presently available in the Dryden collection. Dryden features clean, geometric lines reminiscent of the Art Deco period of the 1920s and ’30s. More collections are sure to follow, so keep checking back to see which Series come out next.